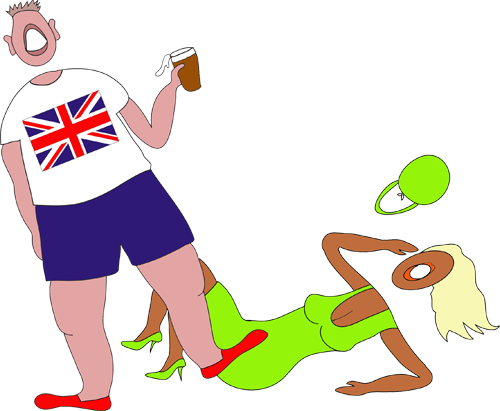 British numpties out on the Razz
Lack style, composture and psazz,
On weekend trips for stags and hens,
Their brash carousing never ends.

They’re loud, they’re obvious, they’re crude,
And to other nationals, rude,
They hunt in packs, boastful, crowing,
And with that, oposition’s growing.

Cloggies make their rude remarks
With spitting sounds and grumps and barks,
French people who are always sniffy,
Are definitely much more iffy.

Germans’ sunbed mass invasion
Turns Brits back to a warlike nation.,
Whist Belgian tourists in the town,
Hide until it all calms down.

But the British carry on
With their Xenophpbic union,
What is really happening here,
This bad behaviour’s caused by beer!