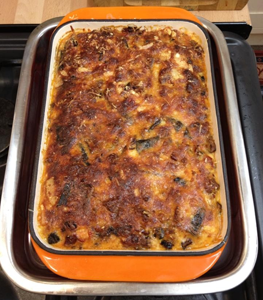 Add the aubergines, peppers and hydrated sun dried tomatoes which have been drained thoroughly and chopped into 1/2″ chunks. Add any remaining garlic oil, the cubed cheese and seasoning. Mix thoroughly (I used my hands) and season with approximately 1 tsp salt and 1/2 tsp freshly ground black pepper. Put everything into an oiled baking dish at least 3″ deep (I used a lasagne dish).

Beat together 1 pint of milk and 4 large eggs and pour over the ingredients in the baking dish ensuring that everything is covered with the egg and milk mix. Leave to soak for at least half an hour, but an hour is better.

Preheat the oven to gas mark 4,180C, 350F. Top the dish with the pecorino, Parmesan or other hard cheese, finely grated. Place the baking dish in a Bain Marie (large roasting dish with near boiling water to come half way up the side of the baking dish) and place in the oven. Cook for approximately 1 hour until the dish is set and the top is a lovely golden brown.

Serve hot with a salad of your choice as an accompaniment. (We served it with home made cole slaw). Deeeeeelicious!

One Reply to “Savoury Bread Pudding”